This story is great, it’s stupendous, it’s astounding! Apparently at a carnival (Carnevale di viareggio) in Italy an elaborate, well-detailed, and massive float of “God-Emperor” Trump (Warhammer 40K) was put up for display to the amazement of audiences everywhere (especially liberals who think that the whole world hates President Trump). The effigy is a wonderful piece of art that I know I will always remember.

The E.U. has been cracking for a while now and the Italian government and people don’t seem to be interested in going lock-step with typical leftist talking points these days. Just take a look at how the French and Italians have been talking about and treating each other for the last several months:

CNN – ‘This fight is madness’: Macron-Salvini spat threatens to boil over

Fox News – Italy refuses to accept migrants on NGO rescue boat, says it should go to France instead

Here’s the stream for the entire parade for any who would like to peruse through it:

Here’s the current description of the parade from its website:

These days the Carnival of Viareggio is even more the protagonist. Every year on Mardi Gras the Carnival of Viareggio is live on national television (RAI 3) to invade into television screens of Italy with the cheerfulness of its spectacular floats. Each year famous guests, politicians and sports figures   come in Viareggio to admire their papier – mâché effigy as well as thousands of people  decree the success of the event.

The Carnival of Viareggio fills a whole month of daytime and nighttime festivities with parades of allegorical floats, local parties, masked balls and festivals of all kinds.” 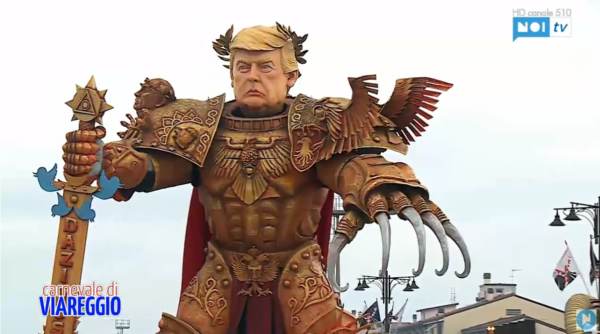