Well the Greek referendum is over with and the Greeks voted with a resounding no (61%) on accepting bailout terms. Plenty of European leaders may say that they believe in the Euro and want Greece to stay in the European Union. The opinion polls that showed the Greeks at a dead heat which each other appear to have been quite wrong. The Greek banks don’t exactly have a lot of cash anymore so the drachma will have to make a reappearance pretty soon.There are no laws written on how a member state would leave the E.U. so now might be a good time for the bureaucrats in Brussels to figure something out.

The United Kingdom will be holding a referendum on E.U. membership by 2017. 260,000 Austrians signed a petition that will force the Austrian government to debate the topic of leaving the E.U. in parliament. The most recent E.U. elections went very well for Eurosceptic parties and the trend doesn’t seem to be bending towards those who believe in the Euro and the European Union as it currently stands.

I don’t see how the Greeks can possibly maintain their current budgets and spending levels. I also don’t see how the people of Europe are willing to give up control of their currencies, much of their economies, and sovereignty to a body like the European Union. The intellectuals who believed and pushed for the Euro seemed to believe that a monetary union would bring political unification. Quite the opposite has happened though. Political differences and demands by different nations that don’t have a real Federal government or other institutions to bind them together are destroying the idea of European integration. Even space cadet Paul Krugman realizes that the Euro is a flawed idea. 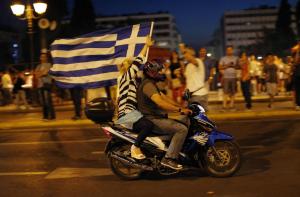 Yahoo! News-German calls for Grexit mount as EU stunned by “No” vote