Feminists have achieved another victory in the People’s Republic of California. Senate Bill 358 was just signed by Governor Brown, under which “Female workers in California will get new tools to challenge gender-based wage gaps…”

One of the most interesting parts to note about this bill is that employers accused of discrimination will have to prove themselves innocent, which is the complete opposite of how the U.S. Justice System is supposed to work. Men are no longer innocent until proven guilty under this legislation.

“The bill by Sen. Hannah-Beth Jackson, a Santa Barbara Democrat, expands California’s existing equal pay law and goes further than federal law by placing the burden on the employer to prove a man’s higher pay is based on factors other than gender.”

No longer is it the burden on the accuser or prosecution to prove beyond a reasonable doubt that one is guilty. The burden of proof is now on the accused. Let’s look at more of what is in this news article.

“‘The stratification and the pay disparities in California and in America, probably in the world, are something that really eats away at our whole society,’ Brown said…”

Has Governor Brown looked into why there are “pay disparities” in the workplace? Is it really that businesses simply pay women less for doing the same work as men? Why would so many business waste their time hiring men if this was true? Capitalists are evil and money-grubbing in the eyes of progressives right? I suppose that doesn’t apply if we’re talking about the Patriarchy. Damned male privilege.

Could it be that the oft cited 77% statistic doesn’t actually control for applicable factors at the same time? Could it be that comparing all men to all women isn’t a great way to look at the pay data? Should we enforce equality concerning death in the workplace? Should women be forced to do jobs that they don’t want to do? Why not enforce gender equality in child custody cases also? Women won’t have to take as much time off from work if they don’t get to keep the kids as often.

It’s also interesting that progressives never really talk about liberty or freedom that often. They’re more likely to use the words equality or fairness. I think that this shows where the priorities of progressives lie. It’s not about allowing individual citizens to make their own choices, but rather, a guaranteed equality of results. If the government has to use significant force to do what progressives believe should be done, so be it. Let’s look at what Ezra Klein had to say about liberty in her article: “Yes Means Yes” is a terrible law, and I completely support it.

“Every discussion of the Yes Means Yes law needs to begin with a simple number: A 2007 study by the Department of Justice found that one in five women is the victim of an attempted or completed sexual assault while in college.

The Campus Sexual Assault Study has been cited by many (including President Obama) as a fine piece of research. It actually uses the number 13.7%, not 20%. It only took data from two colleges in the United States. In a future post I’ll delve into why this publication is extremely flawed in detail, but the War on Women narrative is Ms. Klein’s reason for ignoring the U.S. Justice System

Justice doesn’t matter, just fear and Ms. Klein’s idea of what is right in society. I think that Ms. Klein is taking lessons from the wrong justice system.

“Critics worry that colleges will fill with cases in which campus boards convict young men (and, occasionally, young women) of sexual assault for genuinely ambiguous situations. Sadly, that’s necessary for the law’s success.”

What business do college administrators have in adjudicating any such matters? Rape is a matter for courts to deal with, not for college administrators to decide that someone needs to be deprived of their liberty. She is just talking about “sexual assault” and not rape though. What does Ms. Klein define as sexual assault? The innocent being punished doesn’t seem to matter to feminists.

What if they’re both drunk? Is no one able to give consent? Did they rape each other? Why would the onus be on just the man?

“Then there’s the true nightmare scenario: completely false accusations of rape by someone who did offer consent, but now wants to take it back. I don’t want to say these kinds of false accusations never happen, because they do happen, and they’re awful. But they happen very, very rarely.”

Of course, the author offers no proof to back up her assertions. She’s made it apparent that she doesn’t care how many innocent citizens are imprisoned.

“Colleges have settled into an equilibrium where too little counts as sexual assault, where the ambiguity of consent gives rapists loopholes in which to hide, and forces women to spend their lives afraid.”

The author doesn’t take the time to describe what “sexual assault” is herself. I notice that she only once used the word “rape” in her article, and even then, it was in reference to false accusations. I wonder why? No need for progressives to think of liberty or freedom, the State and Party™ will determine what is best for individual citizens. It’s getting close to the world of Next Tuesday™ in California.

Vox-“Yes Means Yes” is a terrible law, and I completely support it 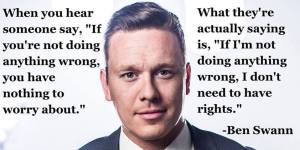 One thought on “Guilty until proven innocent in California”