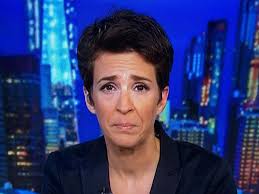 Rachel Maddow is sad and distraught about Mueller’s report and lack of desire for indictments related to conspiracy theories. She’s sad that President Trump is still her President and isn’t going to be impeached anytime soon. She’s sad that President Trump didn’t “collude” with Russian Internet trolls and other components of the “vast right-wing conspiracy.” Rachel wants to know the truth and thinks that the whole country seems to see things with her distorted perspective. It’s almost as though Rachel Madcow has spewed lies, inanity, and conspiracy theories for so long that she actually believes her own invective now. Honestly, this is just sad. Watch:

Perhaps her viewership will fully collapse and she’ll have to “learn to code”? A man can dream right? Rachel and her fellow journalists should also get mad at the Internet while they’re at it. But they’ll probably hold onto a vain hope of impeaching President Trump instead of doing something useful. I’m sure that any day the Democratic Party and their media adjuncts will take down President Trump.

postscript: As one investigation goes into the dustbin another rises up in the Ukraine about Hillary. But of course, the galaxy-brains over at the Washington Post can’t take any hits back at their side.