Hopeful Democratic nominee for President Martin O’ Malley is sorry that he said “all lives matter” and now realizes that such a statement is unacceptable to the Democratic Party. Comrade O’ Malley has come to the realization that all lives do not matter, only the ones the Party deems appropriate or important. O’ Malley now realizes that it’s only OK to state that black lives matter, but specifically regarding interactions with law enforcement and problems caused by “society”.  Any mention of all the murders going on in Chicago, Detroit, and Baltimore that are not committed by police or white people are not important.

Every good comrade knows (especially when going to a Nutroots convention) that all comments to the about the Party must promote racial division for the glory of the Party and that it’s really it’s the votes that matter. Anyone who disagrees with the Party narrative is a racist, bigot, sexist, homophobe, and deserves to be smeared. It’s not like O’ Malley had a chance against Hillary and Sanders anyway.

For those comrades reading this who happen to be white, feel free to grovel and apologize for your existence.

This loyal Party servants gets it!

This comment must have been made by a “clown in blackface“. 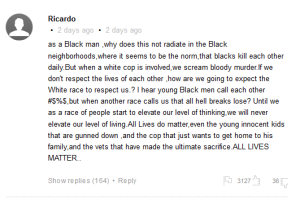 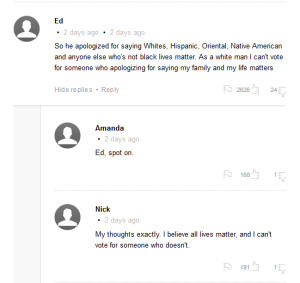