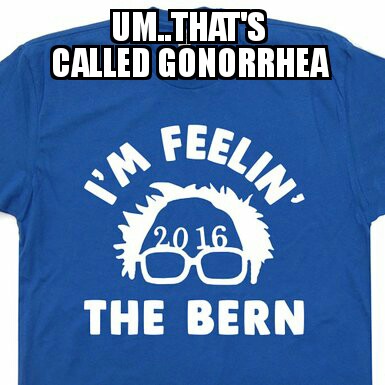 Good evening comrades, it’s time for another round of glorious pictorial propaganda to celebrate Citizen Senator Sanders. The fun never stops at Economic Illiterates for Bernie Sanders 2016. After Bernie is inaugurated next year he will usher in a new era of utopia not seen since the Great Depression. Total government spending will go up from approximately 35% of GDP to double or raise to even greater heights and fully snuff out the private sector. The conversion of the United States of America to the United Socialist States of America will be complete and the last vestiges of capitalism will be purged from society. We will truly live in a paradise. Forward! 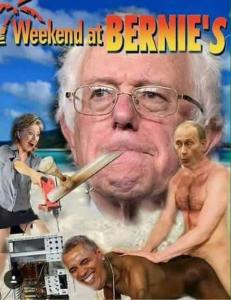 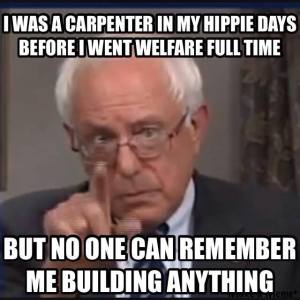 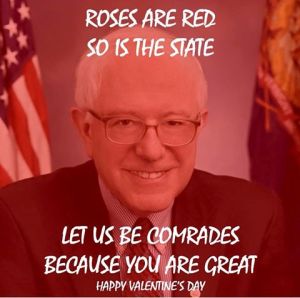 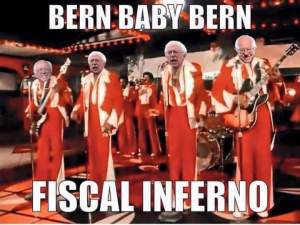 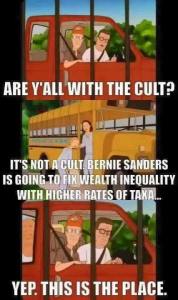 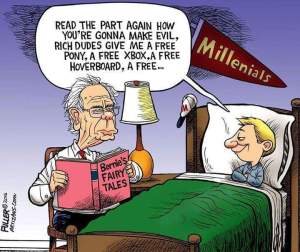 For anyone who’s curious to the background behind the following photo: Washington Free Beacon-Bernie Sanders Condemns Existence of 23 Different Brands of Deodorant While Children Go Hungry 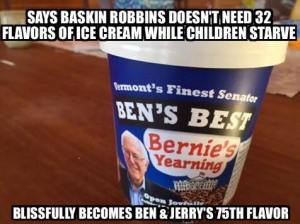 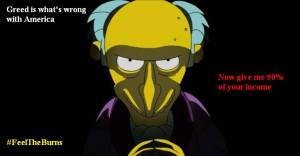 Are you feeling the Bern? Why not start with the U.S. Constitution?! 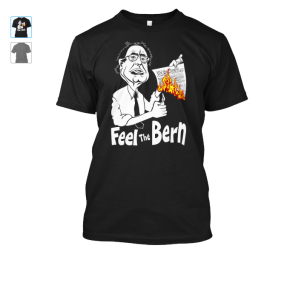 As always, don’t be scared to share all of the media material that I have amassed here.

Are you feeling the Bern?

One of the many things that I’ve read about recently (constantly) on progressive websites is how the Koch brothers are doing things like: buying politicians, donating more money than anyone else, destroying the Earth, push propaganda, and just like doing generally evil things. Like some of the tolerant progressives I’ve talked with you’ll ask for them to be thrown in jail (though they’ve been convicted of nothing) or even demand their painful, agonizing death in a pot of boiling water. Those who seem to disapprove of (or hate) the Koch brothers will use cartoons such as the following: 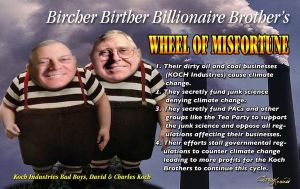 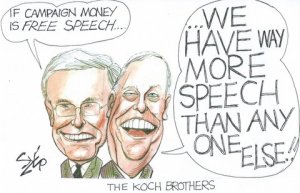 If you’re the folks at the Blue Nation Review, you’ll make the unfounded claim that the Koch brothers have spent the most to pollute our environment. Here’s a sampling of the discussions I’ve had with progressives on Blue Nation Review’s Facebook page:

“Hours” of studying and discussion…

It’s not the money that matters, just what they believe in…

Calling for the brutal execution of the Koch brothers, no less on the same page that’s decrying Utah for going to a quick and painless death by firing squad for convicted murderers.

Before I post up some pictures with opposing views, let’s take a good look at the claims progressives are making. During the 2014 election cycle, the Koch brothers donated about $14 million. They were not the biggest donors though. The Koch brothers were beat out by Tom Steyer ($74 million) and Michael Bloomberg ($28 million). If we take a look at the top  organizations that donated for the 2014 election, they all went overwhelmingly to the Democratic Party. I think it’s pretty clear that the Democratic Party won out in raising money last election, even though it didn’t help them out much. Any claims that the Koch brothers donated the most are simply unfounded. Even if they were, it’s very clear that plenty of progressives/socialists/communists are donating a lot of cash.

It’s always funny when progressives castigate the Koch brothers for destroying the planet or some silly nonsense. Have all of the progressive environmentalists given up their cars? Even if they don’t use a gasoline/diesel powered car, it’s probably charged by electricity from fossil fuels, uses several toxic elements in battery cells that don’t have high storage capacity/energy density (unless you pay $10,000 extra for hundreds of pounds of extra cells), and don’t last past a few thousand deep cycles . Perhaps they all use dirt roads that use no petroleum products? Forty percent of U.S. electricity is generated by coal, do progressives still use electricity? Almost all plastics are made from petrochemicals, perhaps they aren’t using any of those either? I suppose if that if progressives stop using plastics they couldn’t denounce capitalism on Facebook and Twitter with their IPhones.

If we take a look at Tom Steyer, it becomes apparent that he made money off of the coal industry. He’s also claiming to be an environmentalist now. If you’re a progressive though, you’ll claim that Tom Steyer isn’t a hypocrite because Republicans are criticizing him and that he’s divested from coal. Farallon Capital Management, the hedge fund founded by Tom Steyer, is still involved in coal mining and Steyer is still a passive investor. I suppose that Mr. Steyer was such an environmentalist, he just kept pushing coal projects in Indonesia and Australia until it would make him look like a hypocrite. I guess that as long as Mr. Steyer is giving money, progressives don’t generally care right? Only those evil RethugliKKKans and selfish Losertarians shouldn’t give money. That’s the impression I got from the progressives who commented on the Blue Nation Review Facebook page anyway. Concerning “environmental destruction”, I don’t see how they’re doing anything special.

Below are some pictures opposing what the progressives seem to believe in:

Unions are people, but corporations aren’t?!

But, but progressives also give money. It’s also interesting how the progressive posters and pictures say democracy when republic would be more accurate. I’m just nitpicking I suppose.

If progressives want to continue their hatred and death threats for the Koch brothers, I’ll just sit back and laugh. If nothing else the Facebook conversations with progressives will bring plenty of joy and laughter to my soul. And for all of the idiot middle class socialists, occutards, and other borjouis elements who think that they’re part of the proletariat, I have a good picture for you below. Such individuals may not know much about the NKVD, Stalin’s Purges, the Great Leap Forward, or the Cultural Revolution, but they will suffer the same fate if they get what the revolution they so desire. 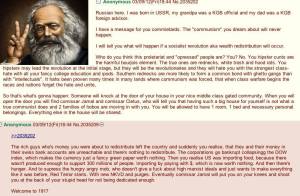