Last year I went through the White Mountain trail in its entirety with a large group as a passenger. It really was nice to just sit back, relax, and take some photos. I knew that one day I had to take my own truck out on this remote and fairly empty trail. You don’t have to be worried about running into a bunch of dirt bikes or ATVs out on this trail, just other full-size vehicles. Turn-around and passing points are few and far between on this trail though so you might have to prepare to back up a fair distance. I highly recommend that you take some time to head up to this wonderful trail. Look here for the rest of the photos and videos. Enjoy! 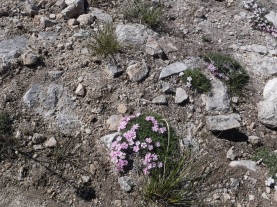 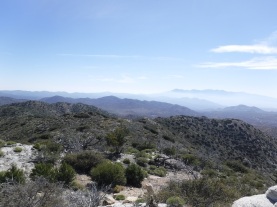 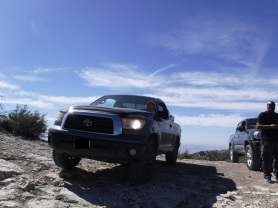 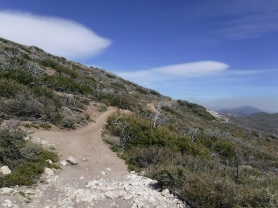 Several months ago I traversed Holcomb Valley Road in its entirety right after a winter storm and greatly enjoyed my trip. The cold weather and snow/ice present during the previous trip seemed to keep the dirt bikes and ATVs away and made the trail much emptier but it was not to be so this trip. I opted to head through this trail again during warmer months with a small group of friends on the way to the moderately difficult trail of White Mountain (photos/videos coming soon). This is an easy trail that any vehicle with some ground clearance could drive through. Look here for the full page with all of the photos and videos. Enjoy!

Here lies an abandoned Toyota 4Runner. I don’t know if the accident or rollover occurred near here or if the vehicle was simply dumped:

Seven Oaks Road is an easy trail that is made up of parts of two different forest roads (1N45/1N04) that any 2WD truck will pass through unless it is really muddy out. This trail lies just north of CA-38 and is a nice ride with access to several camps and hiking trails that is an easy-going ride. I highly recommend that you hit up this trail if you’re passing through the area. Enjoy the video and look here for all of the photos! 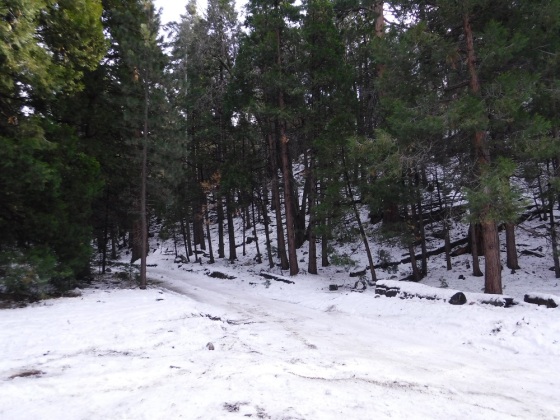 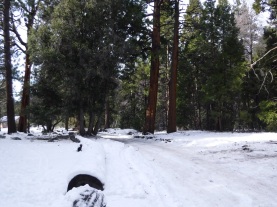 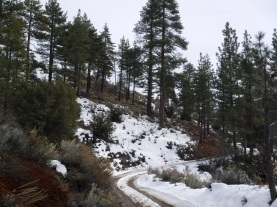 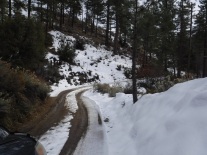 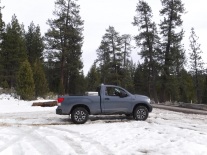 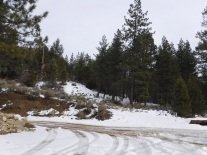 The portions of Holcomb Valley Road that I drove through were of generally easy difficulty and would be easier with no mud or snow. I decided to head up to Big Bear and try some snow wheeling and was very pleasantly surprised by the Winter wonderland I saw. There was lots of fresh snow and not to many people on the trails; I guess that not many drivers were interested in taking on some moderate snowfall. I started the trail on the eastern side near the Big Bear Transfer Station (aka Dump) and head up and west from there. I continued along 3N16 until reaching the junction with Coxey Road (3N14) and headed south as the Sun fell. As I passed through the western portions of the road there was a Chevy Volt with some chains on behind me that made it through with little issue along with a diesel-powered F-250 that got out of a hole as soon as he put his transfer case in 4-LO.

There is a trail south of the route I described known as Holcomb Creek Road (3N14) which is much more difficult and would be harder to complete with a full-size truck like mine. There are numerous hiking, highway-legal 4×4 trails, and even a few OHV trails that connect to 3N16 and it’s a great way to enjoy the area and take in a whole lot at once if you only have an afternoon free and aren’t interested in any hardcore trails. I’ve embedded some map and trail information below. Enjoy the photos and videos and look for the rest of them here on the dedicated page! 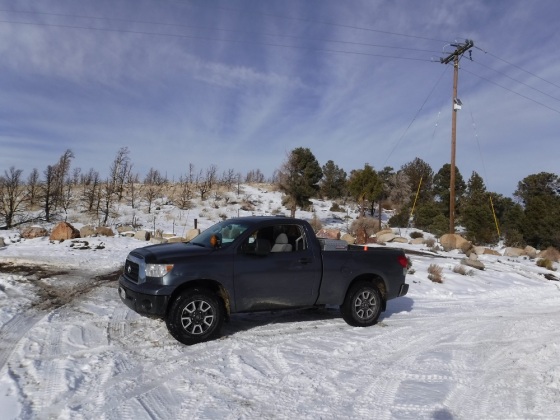 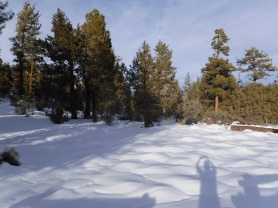 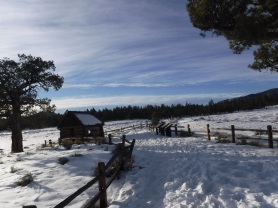 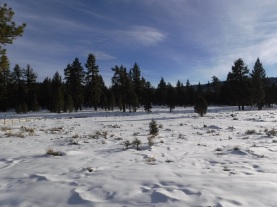 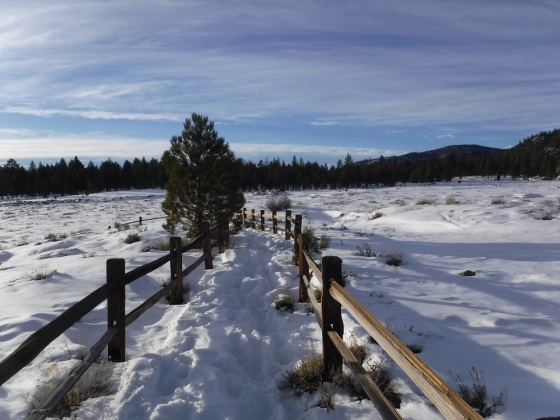 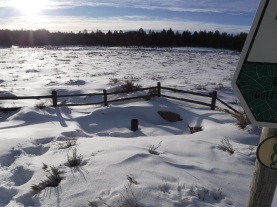 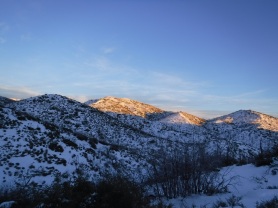 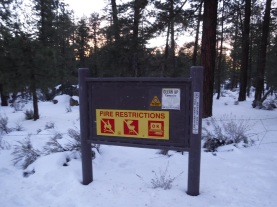 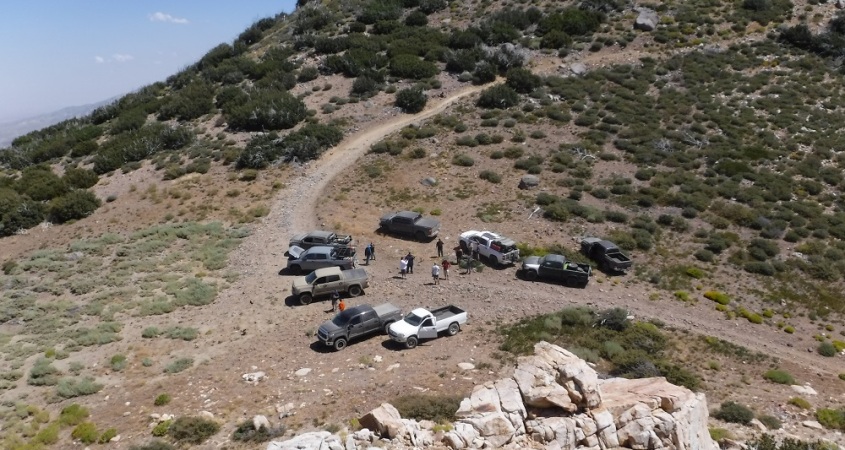 White Mountain is a trail of moderate difficulty that a 4×4 truck with decent tires should be able to navigate. No obstacle is terribly difficult but there are lots of tough rocks of which a few demand careful tire placement. For much of the trail the brush is very tight or there is a steep cliff to one (or both sides) which may make it very fun to deal with opposing traffic. It would be wise to stop your vehicle at an open spot when you get a chance and take a quick look to see if any other trucks are heading your way. For this trip I was a passenger (for once) and just got to enjoy the scenery a little more than I usually do. I also had a great chance to take more photos than normal, enjoy the rest of the photos and videos here on the complete page! 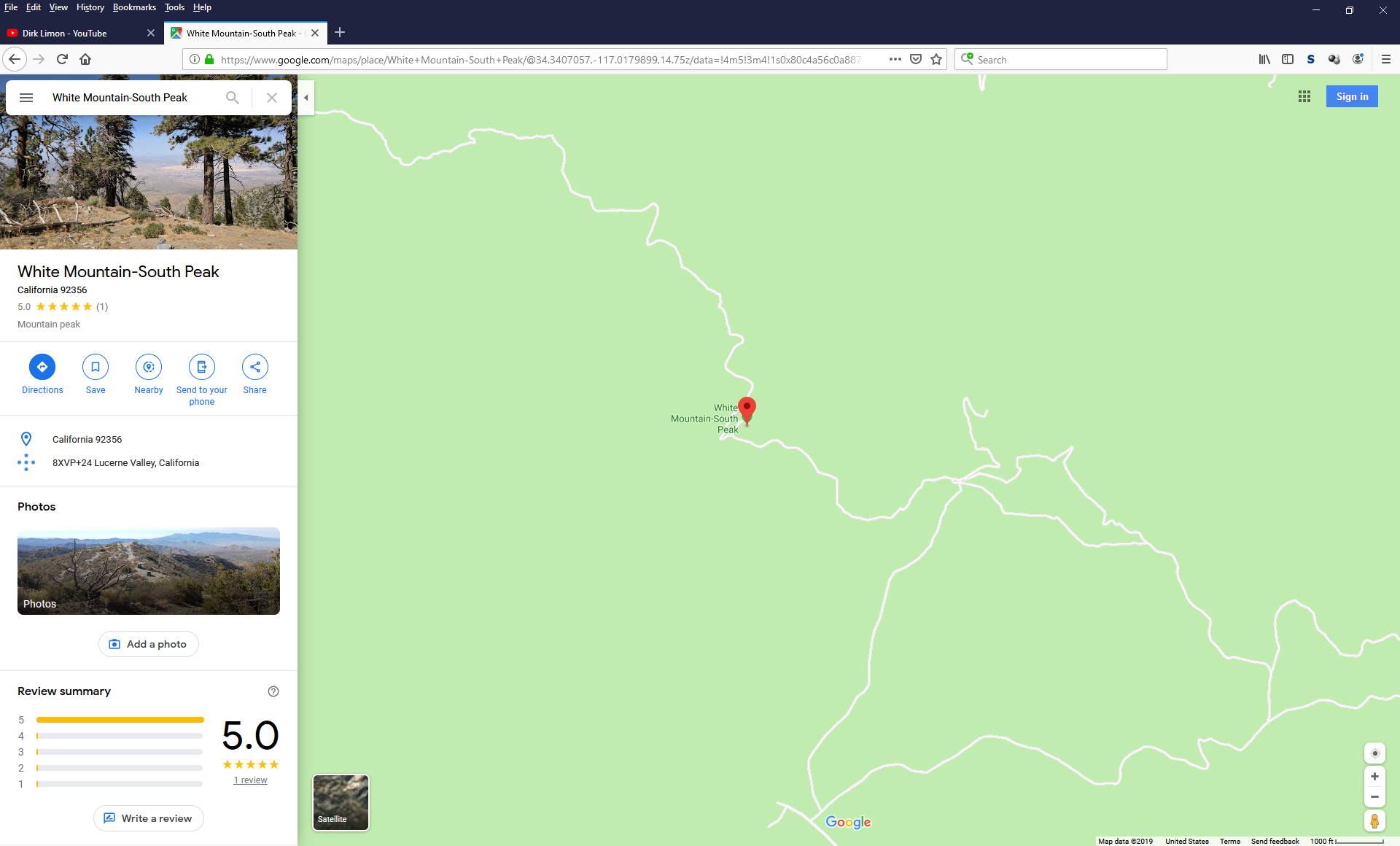 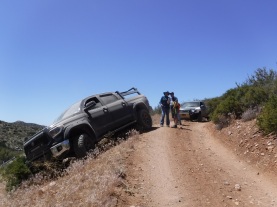 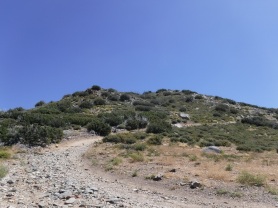 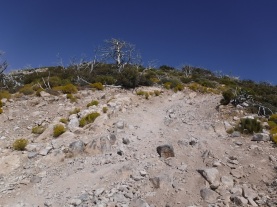 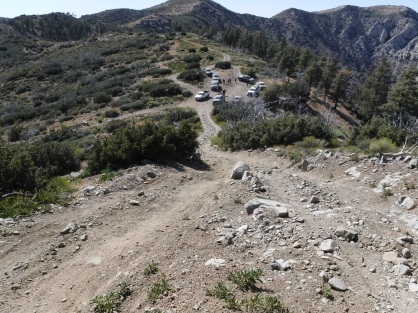 The Coxey Trail (3N14) is a trail of easy difficulty north of Big Bear Lake that any truck with some ground clearance would easily drive through. This trail starts high near Big Bear Lake and gently descends down the San Bernardino Mountains into the vast expanse of the Mojave Desert. The southern end of the trail starts in Fawnskin along CA-38 at the Rim of the World Drive. The northern end of the trail is at the junction of Bowen Ranch Road and Coxey Road. This is a fun, relaxing trail run that will be well worth your time. The rest of the photos and videos may be found here on the dedicated page. Enjoy! 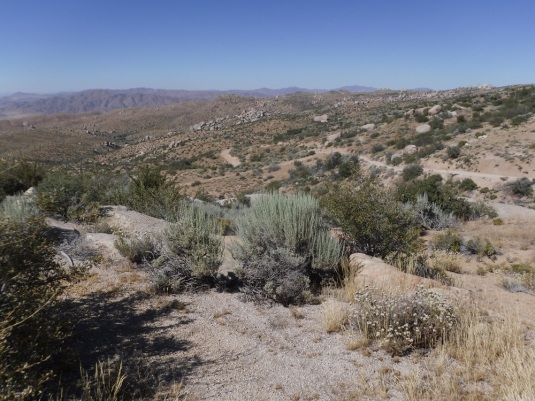 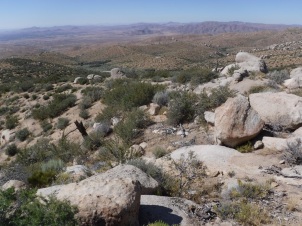 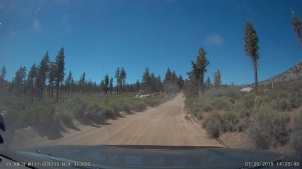 I’m putting both of these trails on the same page due to how they intertwine with each other. I suppose you could just drive along Skyline Drive on its own but only completing Clark’s Grade would require a U-turn as soon as you reached the top. A 4×4 truck with decent ground clearance and tires will easily pass through this road under dry conditions. The path to Clark’s Summit is a narrow shelf road in which encountering opposing traffic is rather miserable. I’ve generally completed this route from the southern end starting at Seven Oaks Road just north of CA-38.

Upon reaching Clark’s Summit Skyline Drive goes off both east and west and snakes its way north towards a few different spots in Big Bear Lake. The views the entire way are amazing and well worth your time! There are many hiking and biking trails that pass through Skyline Drive so be sure to watch out for pedestrians. There are multiple methods of reaching both of these trails and I will have to pass through more of them in the future. Be sure to look on the dedicated page to find all of the photos and videos and enjoy!

The Pilot Rock Truck Trail (Forest Route 2N33) is a trail of little difficulty with some optional spurs of varying difficulty. Any vehicle with some ground clearance should make it through this scenic and stunning trail. If you own a Subaru/modern station wagon it would make it through, albeit with some likely damage to the bumpers. I rode this trail from west-to-east and avoided the majority of the more difficult offshoots that the trail offered. If you want to have a nice, relaxing ride then this is a great place to head out to if you’re passing through the Big Bear Lake or Silverwood Lake areas. Enjoy the videos!

Here’s the western edge of the trail:

Here’s the eastern edge of the trail: 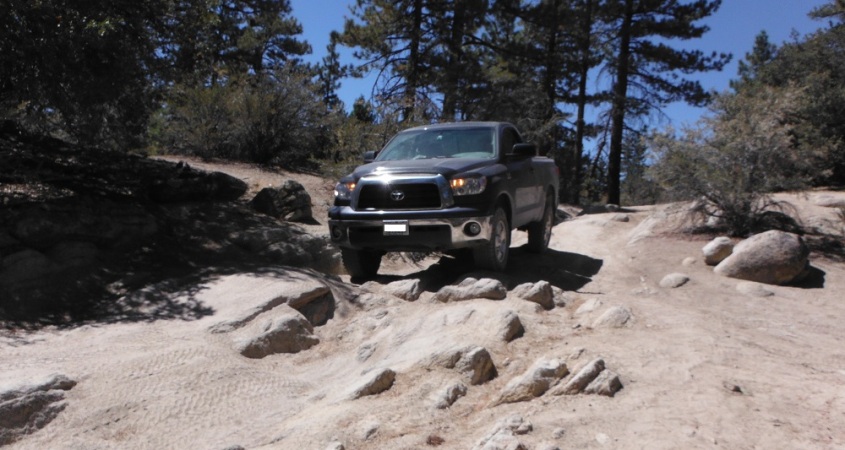 Jacoby Canyon is a moderate trail northeast of Big Bear Lake. The Forest Road designation is 2N61. It can be reached from CA-18 on the east side or from 3N16 on the western side. I hit the trail from the eastern end. My big Tundra with only 32″ tires was able to fit and get through relatively unscathed. I didn’t even need to use that awesome ARB locker I installed in the rear axle. Any truck or 4×4 with some ground clearance and a decent tire should make it through. Going slow also helps. Enjoy! 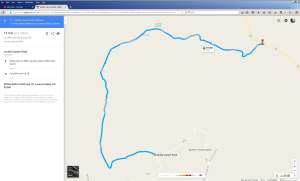 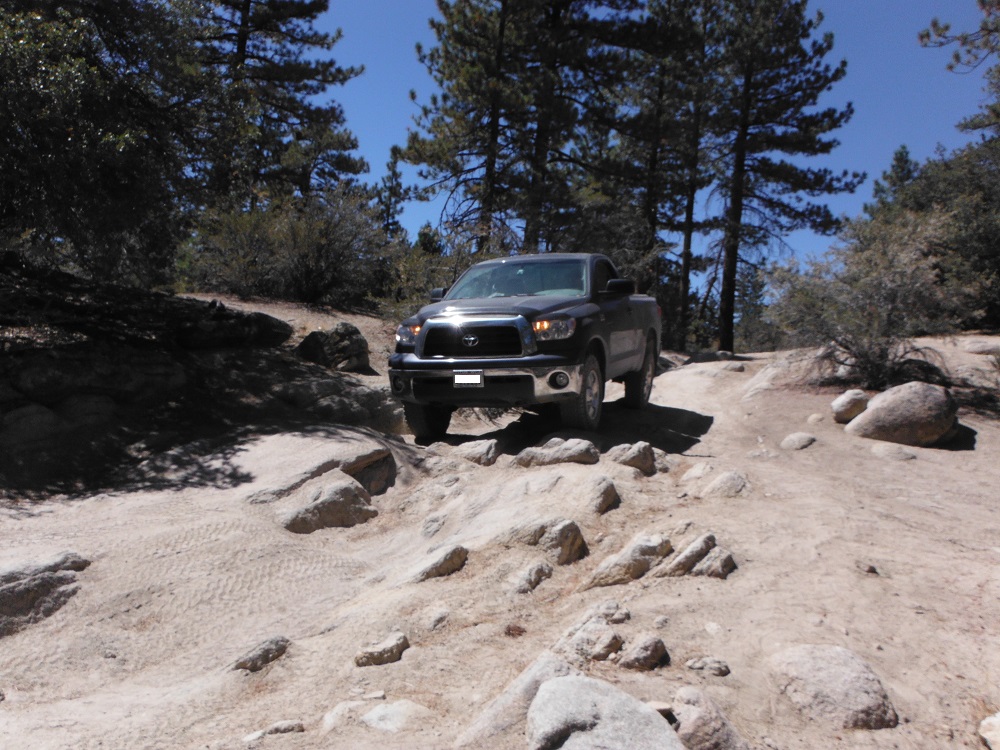